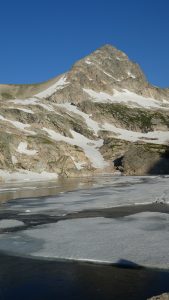 Mount Toll from Blue Lake The ski run is on the left skyline.

Mt Toll is a spectacular peak that towers above the awesome vistas of Blue Lake, in the Indian Peaks wilderness of Colorado, and its somewhat moderate slopes provide one of the best ski descents on the Colorado front range. This peak has become my right of spring passage for quite a few years, and I don’t feel like I’m ready for summer without it.

The steepest mandatory skiing is about 35 degrees and on an open slope so I cautiously wait for stable spring conditions.

This normally occurs in mid May and if the planets align properly, it is possible to ski from the Mitchel lake trail head after an easy 3 mile bicycle approach (The main road usually doesn’t open till late June, but it is usually passable a lot earlier and I find a bicycle a lot better than trudging on the asphalt road).

But 2018 was a bad year for planet alignment in many aspects, and one of them was a closure to all humans on the only access road until late June. This combined with global warming and a low snowpack left a very dismal setting for my annual pilgrimage.

But the road finally opened, and I was in dire need of a ski adventure, so I packed my skis and headed out from the Blue Lake trail head at dawn.

It was another perfect day in the high Rockies and my spirit soared as I headed out on the empty trail.

The throngs of tourists would be arriving soon, but now the wilderness is almost void of humans and I share the trail with only a couple of deer and a few birds. The air is crisp and clear and I pause for a few moments to smell the air and hug one of the ancient Spruce trees that has been here so much longer than me.

The sun begins to show its face on the high peaks and I’m thrilled, but also somewhat shocked to see the diminished size of the old snow field.

It does look skiable and somewhat inviting, but my normal line is dry and the only remaining snow is on the steep south-east facing coular.  The trail that I normally climb is also very dry, and I don’t find any snow till I am above the brilliant vistas of Blue Lake.

The bright Colorado sun has finally surfaced out of the eastern horizon and it soaks my old body with warmth as I stop to change into my heavy ski boots. The snow has already evolved into a summer glacier like snow pack, so I leave my skis on my pack and kick steps in the partially frozen snow.The slope gradually steepens and the high altitude air is thin, so I stop for a few moments to catch my breathe and ponder the vastness of this great wilderness.

The few early morning hikers have been left far behind, and I am now the only human soul in this grand valley.

The only remaining snow is close to 50 degrees in steepness and somewhat variable in texture so I’m not sure that I want to ski it alone, but it does provides a thrilling snow climb and I somewhat foolishly opt to go for the summit. 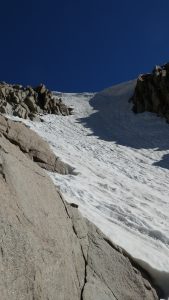 Top of the coular. The lookers right side was steep and really icy. but the Talus was worse

The steep frozen snow nearly reaches the top, but some of it is really icy and very steep so I decide not to ski the steepest part. But, reaching the summit requires scrambling on talus with ski boots and an awkward pack which proves to probably be quite a bit more dangerous than the steep coular.

I suddenly wish that I had left my skis at a bit lower spot, but hindsight is always 20 20, and plan B doesn’t seem too terrifying, as I finally reach the top of this awesome peak.

The summit is calm and sunny, but a very friendly marmot is determined to share my lunch and it takes an aggressive defense of small pebble throwing to partially deter him. This peak is not often climbed and he is really determined to befriend me. The barrage of small rocks eventually succeeds, but he retreats only a few feet and continues to watch me.

The joyful summit is hard to leave, but the thrill of skiing, and the fear of the somewhat ominous task that awaits me makes it very hard to truly relax.

Scrambling down loose talus in my ski boots and awkward pack proves to be as challenging as I had anticipated, and I suddenly wish that I had just gone for the steep slope, but this annoying obstacle is eventually accomplished. The friendly marmot seems to be concerned for my safely or else extremely hungry and lonely so he follows me back to where I finally start skiing.

The slope is still quite steep and the transition to skis is a bit challenging, but the frozen snow has softened a bit with the early morning sun and provides a joyous descent that makes the scary talus just seem like a bad memory.

The east face has become a bit runneled from the sun and recent rock fall, but the warmth of the morning sun makes it somewhat reasonable. This mountain has become a popular ski run, but I am the first person to ski it this year so I try my best to carve my ski signature on the virgin slope.

The exposure on the lower slope faces north and is in almost perfect condition, so I carve a set of perfectly symmetrical turns that will only last a few hours. But, I can’t help but stop to admire them as I remove my skis and prepare for the tourist filled trail.