“The love of the wilderness is more than a hunger for what is always beyond reach; it is also an expression of loyalty to the earth… the only home we shall ever know, the only paradise we ever need — if only we had eyes to see.”               — Edward Abbey 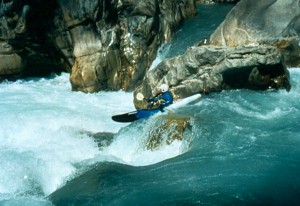 Paul Zirkelbach in the first gorge.

The friendly but very primitive herdsmen were yelling and inviting me into their tent as I ran down the rough trail in search of my kayak. I had just taken a death-defying swim under a large boulder, and the sight of the two shepherds and their shared wife made me feel as if I had died and ended up in another world. But I was still alive, and I would need my boat to continue the journey.

It was day one of a 241-mile trip down one of the last undamned rivers in the world, and the reality of a real adventure had suddenly become very apparent. 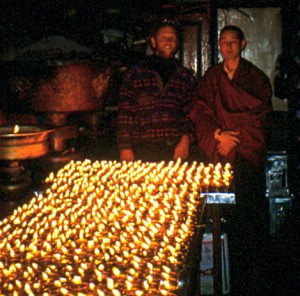 John getting a good luck blessing in a Kathmandu temple.

The Humla Karnali is one of four major rivers that start their lives near the slopes of Mount Kailash in southwestern Tibet. This four-sided, 25,300-foot-high peak is the holiest mountain in Asia and was thought to be the top of the world for many years. It is also the source of the Sutlej and the Indus in northern India, and the mighty Tsangpo-Brahmaputra, which flows eastward through Tibet.

“This is one of the best multi-day Class IV-V runs in the world!” Dave Allardice exclaimed, as we shared a few beers at his house in Kathmandu. “It has only been paddled a handful of times, and the scenery and whitewater are outstanding.” 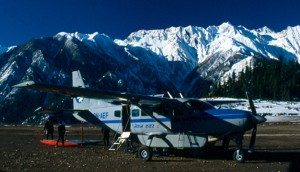 Simikot airport; The beginning of the journey

Dave was a Kiwi who had been one of the first kayak explorers in Nepal. He had started a rafting company called Ultimate Descents and had co-authored the White Water Nepal guidebook. His suggestion sounded too good to miss, so Ken and I started to plan the expedition and recruit a team.

The section that we were attempting to run started near the Tibetan border and dropped about six thousand feet (an average of twenty-five feet per mile for 241 miles).

The journey would take us from a high mountain canyon to the jungles of southern Nepal. The first 60 miles were supposedly quite challenging, so we decided that March would give us the best combination of reasonable weather and low water.

Many of our friends were eager to go, so it was quite easy to organize the team of six men who ranged in age from 27 to 47.

Ethan Greene was the youngest, but he was already a seasoned veteran of many rivers. He was studying avalanche science at Colorado State University and would eventually earn a doctorate.

Randy Kennedy was 45 and a strong member of our local “Team Advil.” He was a civil engineer in Denver then, but he had spent a good portion of his life guiding paddle rafts and waiting tables so that he could pursue his dreams of adventure. He often told me that guiding rafts and hanging out in the rafters camp on the American River in California had been the best part of his life, and even after he had a career, he had given up a big promotion at his firm because it would have cut too deeply into his adventure schedule. We were close friends and had paddled many rivers together.

At 46, Paul Zirkelbach was the strongest member of “Team Advil.” He was a Denver contractor who had a passion for hard whitewater and had kayaked most of the classic hard runs in the western United States. He tried to make it to California every spring, and we had enjoyed many great rivers together.

Ken Ransford was a CPA and attorney from Carbondale, Colorado, who had spent quite a bit of time in Asia. A few years before this trip, Ken and his wife Emily had embarked on a one-year journey in the Himalayas and other parts of the vast continent. (They ended up having too much fun and decided to stay for another six months.) Ken knew the region very well and had made friends with many of the locals, who were very helpful with our logistics. His combination of skills made him the best barterer that I have ever met, and he saved us hundreds of rupees. Ken and I (along with our friend David Neff) had been to Nepal together three years before and had spent a fantastic month paddling many of the classic runs.

Andy Zimet was the only person on the trip I had not previously met. He was a substitute anesthesiologist who spent most of his free time pursuing adventures. An old climber, Andy had converted to kayaking at a late age, but he made up for the late start with his great energy. He was a very brave paddler and was eager to probe many of the rapids.

I have been a whitewater junkie since 1983, and my passion just seems to grow with age. I especially enjoyed multi-day, self-support trips and had been very eager to return to Nepal.

The road from Katmandu to Nepalganj was long and very rough. It is about a twenty-eight-hour bus ride, so we decided to stop along the way and paddle a Class III river called the Trisuli. This gave us a good chance to test our gear and hone our paddling skills, which hadn’t been used for a few months.

When our tired group finally reached the airport in Nepalganj, we were greeted by a friend of Dave’s who spoke a little bit of English. “One-half meter of ice in Simikot. One or two days more waiting for airplane.”

He took us to the only nice hotel in town, a classic, English-style resort. The grand old buildings were freshly painted and surrounded by a very large courtyard, which was filled with lush blooming gardens and some very exotic ponds. The price was an “exorbitant” ten dollars per night, but we were rich gringos and ready to go with the flow. The hotel had a quaint little bar that was built with the finest hardwoods, and the lobby was adorned with photos of tigers and elephants and the lifestyles that accompanied the early hunts.

Nepalganj is the gateway to Royal Bardia National Park, which is the home of one of the largest remaining populations of Bengal tigers. It is the largest city in western Nepal, and as it is only ten miles from India, it is a crossroad for merchants of many cultures. We spent a pleasant afternoon cruising a very interesting market, where a diverse mixture of colorfully dressed merchants sold an amazing variety of goods, including false teeth, colorful fabrics, and spices.

The food at the hotel restaurant was excellent, and the quiet courtyard was a great place to work on our boats and repack our gear for the third or fourth time. Trying to fit camping gear and seventeen days worth of food into a kayak is a very challenging task.

The two days of warm weather had melted the fresh snow, and we were awakened early with the news that our pilot was ready to go. The plane was too small to carry six kayaks and six people, so we drew straws to see who would go first. The lucky winners had already boarded the plane when the pilot announced that there was room for everyone, but the boats would have to come later. We were in no position to argue, so we climbed aboard and headed off toward the Tibetan border.

The sky was clear, and as we climbed into the air and gazed onward toward Tibet, we had an incredible view of the many high peaks that were still white from the recent storm.

The co-pilot was a Sherpa woman who spoke fairly good English. “The Karnali River is down there!” she said with a bright smile, pointing to a cloud-filled valley.

The high mountains of northwestern Nepal and Tibet towered in the distance of a never-ending panorama of snowcapped peaks and deep valleys. The small plane barely skimmed over the top of a high pass and then slowly circled its way down to the short runway in Simikot. Our excitement grew as we stepped out of the plane and into the thin fresh air of the high mountain village. The view was truly spectacular, and all the days of anticipation were finally replaced by the reality of starting this great expedition.

Apparently, it had been a long time since a tourist had been there, so the customs agents looked very surprised to see us. They appeared somewhat nervous as they carefully examined our passports and the trip permits we had obtained in Katmandu. One of the agents spoke a little English, and I tried to converse with him. He said something about the Karnali river being very dangerous, but I didn’t understand the whole sentence.

He gave me a very strange look as I continued talking.

“Some of them are not always so nice,” he replied with a grim look.

I didn’t understand him completely, so I chose to ignore most of it. We hadn’t come halfway around the world to get scared off by a little danger.

They carried a desk outside into the warm sun and typed away on an old manual typewriter. The procedure took more than an hour, so we entertained ourselves by playing hacky sack while we waited.

Suddenly, we heard a faint roar, and our plane dropped out of the nearby mountains, screeching to a stop on the muddy runway. It was a great relief to see all of our gear intact, and our eager hosts helped us haul it up to the guesthouse. Our jubilant group enjoyed the warmth of the bright sunshine and spent the afternoon exploring the small village of Simikot and the nearby hills. 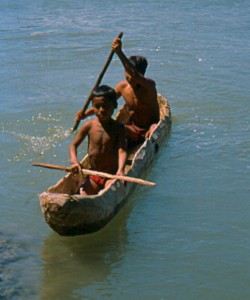 Local boaters who came to check us out during a lunch break. 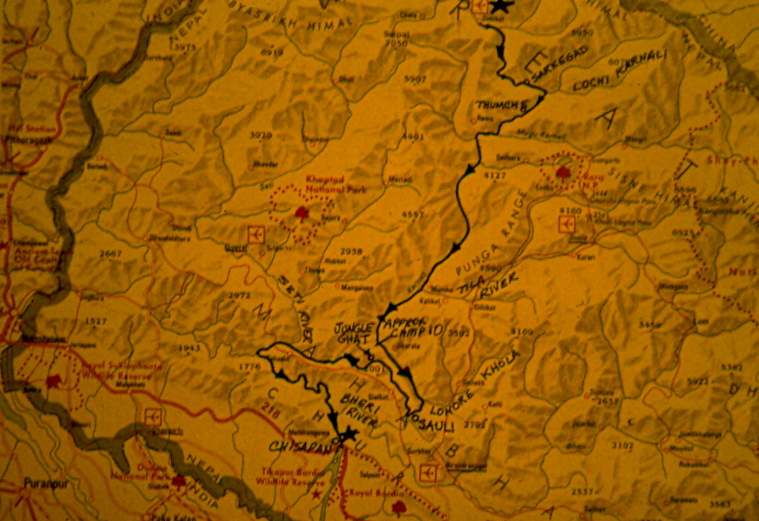 The Humla Karnali River from Simikot to Chisapani