“Twenty years from now you will be more disappointed by the things that you didn’t do than by the ones you did do. So throw off the bowlines. Sail away from the safe harbor. Catch the trade winds in your sails. Explore. Dream. Discover.”

“Hold on the course!  There is a racer down,” the race official yelled, as we huddled next to the starting hut. 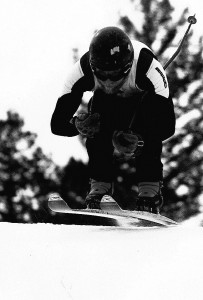 It was my turn to make the run, and I had already finished stretching and was mentally prepared to go blasting down a mile long course at a very high speed with rough snow and bad visibility.

But the weather was deteriorating rapidly, so I put my jacket back on and jumped up and down to try to stay warm and loose.  The minutes ticked by, and I tried to relax while concentrating on the course that I had memorized during the last few days.

“I’m sorry to report that the last racer has been injured,” the starter told us.  “They are repairing the course, and we should be starting again, in a few minutes.”

“It sounds like there is a very bad rut by the sixth gate,” remarked one of the racers. “This weather sucks.”

My goggles were getting fogged, so I removed them and swirled them around in the cold air.

“Okay! The course is clear. Next racer,” yelled the starter.

I quickly removed my jacket and headed for the starting gate.

The anxiety of waiting was finally over, and it was time to get focused.  I took two good skating strides, quickly pulled into a tight tuck and tried to keep my skis flat.  Flat skis don’t track very well and are hard to control, but they glide very quickly, and speed is what downhill racing is all about.  The visibility was bad, but I could still see the pine boughs that had been dropped to mark the course.

The wind was starting to whistle in my ears, and the ground was flying by at a very rapid pace.

“Get ready for the first knoll! Got to pre-jump, and suck it up.”  Too much air is dangerous — and slow.

Three down, and twenty to go as I headed into the steeps.  My speed increased, and the visibility got even worse as I approached the scene of the last crash.  I could barely see the ruts in the bad light, and my skis bounced radically as I struggled to carve the turn.

“Oops!” Too far back!”  I almost crashed, but somehow managed to keep my balance and rocket forward toward the next gate. The conditions and visibility improved as I reached the lower elevations, but the course got even steeper with the fastest portion just ahead. My skis bounced again as I tried to hold a good tuck and carve smooth turns on the rutted course. The last hill was the steepest, and I tried to prepare for the strong gravitational forces of the compression, which was probably the most challenging and dangerous portion of the race. My legs were burning with pain, as I flew over the knoll and used my last ounces of strength to pre-jump and carve my way to the finish.

“Yow!  What a rush!”  Adrenaline is a wonderful drug, and I had just gotten a huge dose of it.

Twenty-four is a very late age to start downhill racing, but it’s better late than never and the thrills were probably just as good or better.  There was no pressure to make the U.S. team or win a world cup downhill. I set modest goals and competed against my friends, and we all shared a few beers after the races.

The Aspen town race league was, and still is, one of the best racing programs in the United States, and the Town Downhill was the premier event.  The race organizers borrowed a radar gun from the local police, and clocked a top speed of eight-five miles per hour on the steep hill before the compression.  My personal speed record of seventy-eight was quite a ways back in the field, but I left with one of the best memories of my life. 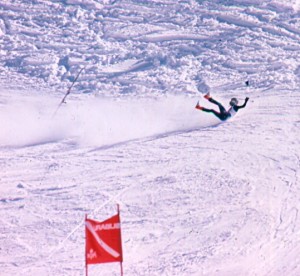