If a man walks in the woods for love of them half of each day, he is in danger of being regarded as a loafer. But if he spends his days as a speculator, shearing off those woods and making the earth bald before her time, he is deemed an industrious and enterprising citizen.”   — Henry David Thoreau 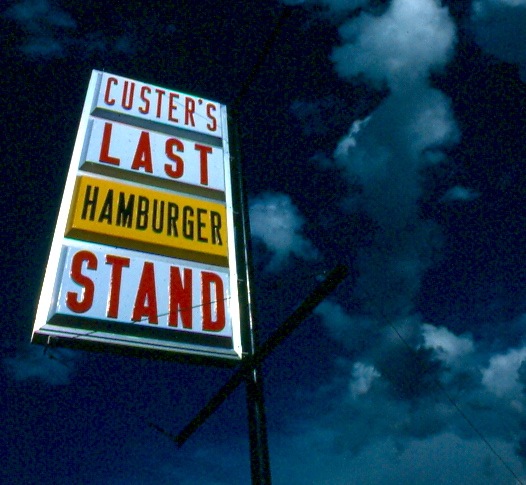 Fast food in the seventies

“Wow! That was really good for my psyche!” exclaimed Pete Delannoy, as I caught him after a 50 foot lead fall.

It was the longest fall that I had ever witnessed, and I caught him just a few feet from the ground with a running belay. It was good for his psyche because he was afraid that he might have hit the ground.  Pete was trying to climb Hairy Pin, one of the classic Needles routes, and his fall had been stopped by one old bolt. After a brief rest, he tried again, with the same result. 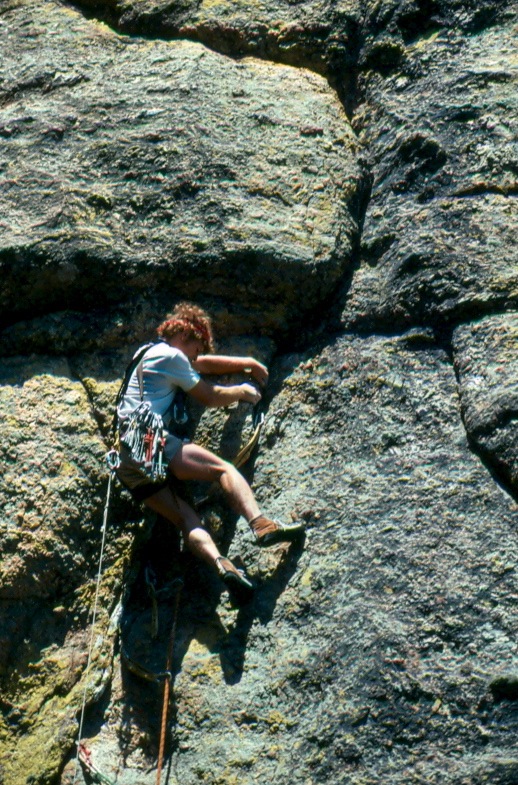 Pete Delannoy on the 1st ascent of The Crack of Earthly Delights.

“Thanks for a great belay! I think I have the move figured out now,” he said, and immediately went up for a third try.  The third try was the charm, and I had a chance to follow with a tight rope. I also fell, but my fall was only a few inches, and I managed to make the moves on the second try.

The South Dakota Needles were the closest climbing area to my home state, and I had the luxury of hanging out with some top “rope guns” for the better part of a summer in the mid-1970’s.

I had met Bob Archbold at the Devil’s Tower, and he invited me to join him at his deluxe camp. Bob and his friend Jim Black had started a climbing school at Sylvan Lake and had set up very luxurious accommodations.

The camp site they had chosen was in a beautiful, remote setting and had a large rock overhang to provide shelter. A few pitons provided anchors for a deluxe racking system, and we also had a picnic table and a large hammock.  Most of the local climbers called it the “sex cave,” but it was really just an overhanging rock.

The guiding business wasn’t very good, but some beautiful Midwestern gals were very impressed by the manly climbers, and the cave family grew.  The warm summer days were spent climbing and hiking, and the evenings were spent socializing around a warm fire.  We discovered a variety of mint plants, that made some very tasty tea that complemented the simple gourmet meals that we enjoyed in our wilderness paradise.

There were only a handful of climbers in the Needles that summer, but Bob seemed to know them all and it was a very friendly family. Many new routes were being established, and I had some great opportunities to try them.  I was somewhat of a fledgling climber, but it was a wonderful experience to hang out with all the heroes, and my skills gradually increased. The many spectacular spires offered some incredible summit vistas, and the lush meadows between them provided a maze-like setting with hundreds of secret places.

One of Bob’s best friends was a legendary old climber named Paul Muell, who had served the U.S. Military in a special forces unit.  He was also an explosives expert and was working on the Crazy Horse Monument in it’s early days of construction.  Paul was an excellent climber with a very cool head and bravely led the Needles classics, which were considered very dangerous leads in most of the climbing circles.

All of their routes were climbed free, and they used a very minimal amount of fixed protection, which was always placed by the leader. This standard has survived the test of time and has left a paradise of pristine rocks that are uncluttered with bolts and webbing. Drilling a hole in granite with a hammer while standing on a small crystal with a twenty-foot run-out is quite a bold task, so the few bolts that exist are very well placed.

“The protection is adequate, and you don’t need a big rack,” remarked Paul, as he reached into his tobacco can for some ground up rock dust.  He didn’t use chalk, and he often climbed in the Conn style, with some old tennis shoes that he called K-Martos. But, when the going got really tough, he would put on his PA’s and would occasionally reach into his back pocket for the tobacco can.

Climbing with Paul and Bob was a real joy, and I had the privilege of experiencing the summits of many of the classic routes.

The Needles is still one of my favorite places on the planet, and I have very fond memories of our little cave family and the magical summer that I spent there.