How old would you be if you didn’t know how old you was?” 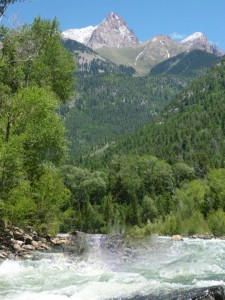 “I’d like to do the Animas again, and so would some other folks. Would you like to join us?” Ken Ransford asked, as we enjoyed a celebratory beer at the Roaring Fork takeout. Ken was about to turn 50, and the early symptoms of mid-life crisis were starting to emerge.

“Oh man! I don’t know,” I replied. “I think I’m getting too old for that stuff. I swam the whole Rockwood Box at seven grand when I was young and foolish, and the very thought of that canyon makes me nervous.”

“Aw, come on. You can still do it. It’s going to be low water, and it is such a beautiful place. I would like to do a three-day trip and spend one day hiking. If we camp at No Name, we can do a great day hike in a very remote area.”

A month later, I met Ken at the put-in. The flow was only about 1,000 CFS, so we packed all of our gear into our boats and headed cautiously downstream.

“Danny Roman and Jim Cardimone are planning to join us tomorrow night, and some other people may show up,” Ken told me, as we headed into the long gorge.

The mighty Animas starts as a tiny creek near Silverton, Colorado, but it soon picks up steam as it drops through an incredible canyon in the heart of the San Juan Mountains. Dozens of majestic peaks tower above the lush canyon, and a myriad of small waterfalls enhance the spectacular scenery, as well as add to the river’s volume.

Being there again revived some incredible memories of my youth, and we paddled safely to No Name Creek. My life had changed quite a bit in the last twenty-five years, but this canyon was still the same, and the scenery was better than I had remembered.

We were carefully scouting No Name Rapid, when a young pair of boaters emerged on the scene. They had decided to skip the scout, and a young gal caught the edge of a hungry entrance hole. The hydraulic feature tipped her boat and she broached for a moment on a large rock. It was an awkward place to roll, and her first attempt failed, but the rolling motion freed her from the broach, and she continued down the class V rapid upside down. The second rolling attempt also failed and so did the third and forth, but her boat followed a fairly clean line, and she finally rolled up at the bottom. She was quite out of breath, but proudly stated that she had never taken a swim while kayaking. She had only been boating for a couple of years, but she had already paddled many class V rivers.

We camped in an empty paradise, and the gentle sound of the moving river lulled us to sleep.

We awoke at dawn and found a primitive trail that led us back upstream to Ten Mile Canyon. It was a long trail, and a bit difficult to follow, but the rewards were great. The very primitive track wound its way up a remote valley with no inhabitants, and we scrambled to the top of a high pass. A small herd of young elk was playing in a shallow pond, and we spent about half an hour watching them. It was a weekend day, but we were the only humans in the whole region.

A warm fire was burning when we reached camp, and we were very happy to see Jim and Danny and a few other boaters who had decided to join us. Jim and Danny had been paddling for decades and had already broken the dismal age 50 barrier. We had known each other for more than twenty years and had paddled many rivers together, so it was a great reunion. The whitewater tales of terror flowed as freely as the whiskey, but as we hoped to live to tell more stories after this trip, we retired early and awoke with the dawn.

We were busy packing our boats when another beautiful young woman arrived on the scene. She had started very early, and had paddled solo to our camp site. She was hoping to find some companions for the rest of the journey, so we invited her to join us.

It was a bright, sunny day, but the river was cold, and the low water was more technical than a medium flow would have been. After a few miles of moderate whitewater, we reached the old broken bridge that marks the rapid of the same name. It was somewhat technical at this flow, and a careful scout brought our adrenaline up to the required level.

Adrenaline is a wonderful drug, and it may be the key to the fountain of youth. The sudden surge made us all feel young, and we rushed to our boats and aced the rapid.

After a rowdy round of high fives, we paddled onward to the upper Rockwood Gorge.

“Danger! The Rockwood Gorge is very dangerous, and walking on the tracks is strictly prohibited,” a sign at the entrance to the steep box canyon stated ominously.

We caught a small eddy just above the gorge and tried to scout the first big drop, but the crux moves could not be seen from our viewpoint. The left side was the only part we could see, and it looked horrendous.

“I ran that left side once and nearly died because somebody gave us the wrong beta. It’s a horrible hole!” one of the younger boaters informed us.

“Let’s just go for it!” Jim exclaimed, as we walked back to our boats. “I checked Mountain Buzz yesterday, and there were no warnings. And we’ve all done this before and know the line.”

The first big drop of the Rockwood Gorge was only Class IV at low water, but it was very intimidating. It could be scouted from river left, but it was a very difficult scout. There was a clean line on river right at low water, but it led to a pretty big horizon-line drop in a very sheer box canyon. At high water, it was a nasty, V-shaped wave that boaters had dubbed “Mandatory Trash,” and it was the source of my mile-long swim at seven grand.

The adrenaline kicks into second gear as we line up in the eddy and take our turns on the blind drop. I watch a few of my friends disappear over the horizon, then paddle out of the high eddy and head downstream.

Suddenly, the only thing that exists in the world is this river, and I paddle carefully toward the drop. There is a small entrance rapid that is best run on the left, and I shudder at the thought of accidentally running that channel. But the moves are easy, and I maneuver my boat back to the sheer wall on the right. Now the drop is in sight, and a strong, curling hydraulic is waiting to tip me over and push me into the wall, but my instincts point me in the right direction.

“Yow! What a rush!” I exclaimed, as I paddled into the eddy and greeted the group with another round of high fives.

We had now passed into the magnificent gorge, which was as incredible as any place that I had ever been. The floodwaters had created amazing sculptures in the narrow canyon, and the late afternoon sun transformed the abyss into a truly majestic setting. We paddled onward for another mile of less-significant rapids to a well-marked takeout.

“Wow! That was awesome! We have to make a vow to do this when we’re sixty,” I suggested.