“If you aren’t living on the edge, you’re taking up too much space.”

— Extreme sports quote from the 1980s 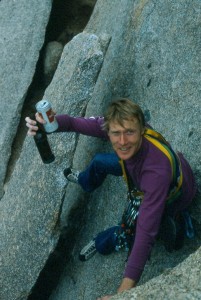 “It doesn’t look like we’re going to fall in love tonight, so we might as well go climbing,” I remarked to my friend Dave Black, as the party we were attending in Flagstaff started to dwindle.

“Sounds good. I’ve got some food in my truck, and the climbing gear is always loaded,” he replied, as we climbed into his old Dodge four-wheeler.

We arrived at the Granite Mountain trailhead about three in the morning and quickly fell asleep in the parking lot.

The summer sun was warm, and we awoke groggily at about eight.

“What’s for breakfast?” I asked, as I crawled out of my sweaty down bag.

“These sardines ain’t bad, and we still have a few beers left,” Dave replied, then quickly guzzled a warm Budweiser.

“I guess I’ll try some sardines, if that’s all we have. Which route do you want to do?”

“Wanna try C. W. Hicks again? We almost got it last time, and I’ve been thinking about it ever since,” Dave replied. “I have a new technique that I’d like to try, so I’ll lead the crux pitch.”

Then he chugged another beer. “Ahh! That tasted great! Lets go.”

We quickly loaded the rack and rope into our rucksacks and ran up the trail to the crag.

The first pitch felt quite easy, and I scrambled quickly to the top and set up a belay.

“Your turn Dave! Give it your best shot.” 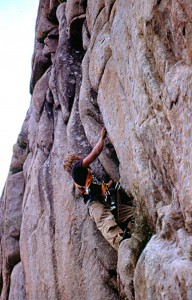 This was our third attempt at the crux pitch, and Dave was very eager to get to the top. He scrambled quickly up the 5.9 dihedral formation that we had more-or-less memorized and placed a couple of bomber stoppers along the way.

“This is where we fell off last time, so watch me close,” he reminded me, as he inched his way up the 5.11 moves. “I did this in my dream last night, and it felt easy,” he added.

Then his right leg started to shake like a sewing machine. “Damn it! I hate it when that happens. Watch me!”

He struggled to gain his balance and lunged for a tiny finger hold at the end of his reach. “Falling!”

The protection held, and my belay caught him after about a ten-foot fall. “I think that I got about an inch higher than I did last time,” he remarked with a chuckle, as he tried to regain his strength. “The trick is to balance on that one little foothold, but I couldn’t seem to do it. Let me try again.”

“Looking good, Dave,” I yelled, as he scrambled back up to the point of his last fall. “You’ll get it this time.”

“I can’t get my damn leg to relax, and my arms are getting pumped,” he said, while clinging to the steep cliff. He took another desperate lunge, this time managing to grasp the tiny hold that he had missed on the last attempt.

“Try to work one of your feet up to that next hold!” I encouraged, as I got ready to catch another fall.

“I’m trying, but my arms are pumped!” he yelled, as he attempted another lunge. “Watch me! I’m falling.”

He had managed to gain another two feet of altitude, so he fell about four feet farther, but the protection held again. “Damn it! I really want to get up this route,” he said, as I lowered him back to the ledge while he examined the wound on his left knee.

“Your turn!” he laughed.

I quickly scrambled up to the stopper that was now welded into a small crack in the granite face.

My pace slowed to a crawl. There was another very small foothold close to the awkward one, and the combination allowed me to gain the small finger hold without a lunge. It was a very strenuous move, but I managed to find a larger foothold and tried to place another piece of protection.

“Watch me! I’m barely hanging in here!” I told Dave, as I struggled desperately to place the stopper.

“Please don’t fall now,” Dave replied. “I don’t want to make you nervous, but you are about ten feet above that last piece, and you’ll probably hit this ledge if you fall. There is a better foothold about six inches to the right of your left foot.”

The new foothold created a much more balanced stance, and I managed to place another bomber anchor.

“Thanks Dave. That really helped. But my arms are fried. I need some tension.”

“Tension my ass! This is supposed to be a free climb. Summit or plummet,” he replied with a hardy laugh. “I’m ready for another try.”

I wasn’t ready to give up yet, so I tried to rest, holding still in my awkward stance.

“It looks like there are only a couple more hard moves,” I told Dave after I’d regained some strength. “But my arms are pumped. Watch me! This is really thin.”

The next move required balancing most of my weight on a small foothold while I tried to extend upward to a reasonable hold in the thin crack. The hold was almost in reach, but I was a little too anxious to grasp it. The lunge upset my balance, but the stopper held, and the fall was only about four feet.

“Is it my turn yet?” Dave asked anxiously.

“I’m sure glad I brought these beers along,” Dave said, as he chugged another Budweiser. “Ahh! That tasted great! I’m ready to flash this now.”

A few minutes later, we were standing on top of the crux pitch. “Nice lead Dave. We finally did it. Foss is having a big “Reggae” party on Fountaine Street tonight with lots of wild woman. Lets go celebrate. 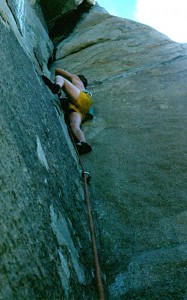 ”Most of the fun things are dangerous and alcohol is definitely one of them, but Dave has reformed his evil ways and is happily married to a beautiful Peruvian woman.