“Climb the mountains and get their good tidings. Nature’s peace will flow into you as sunshine flows into trees. The winds will blow their own freshness into you, and the storms their energy, while cares will drop off like autumn leaves.”      — John Muir 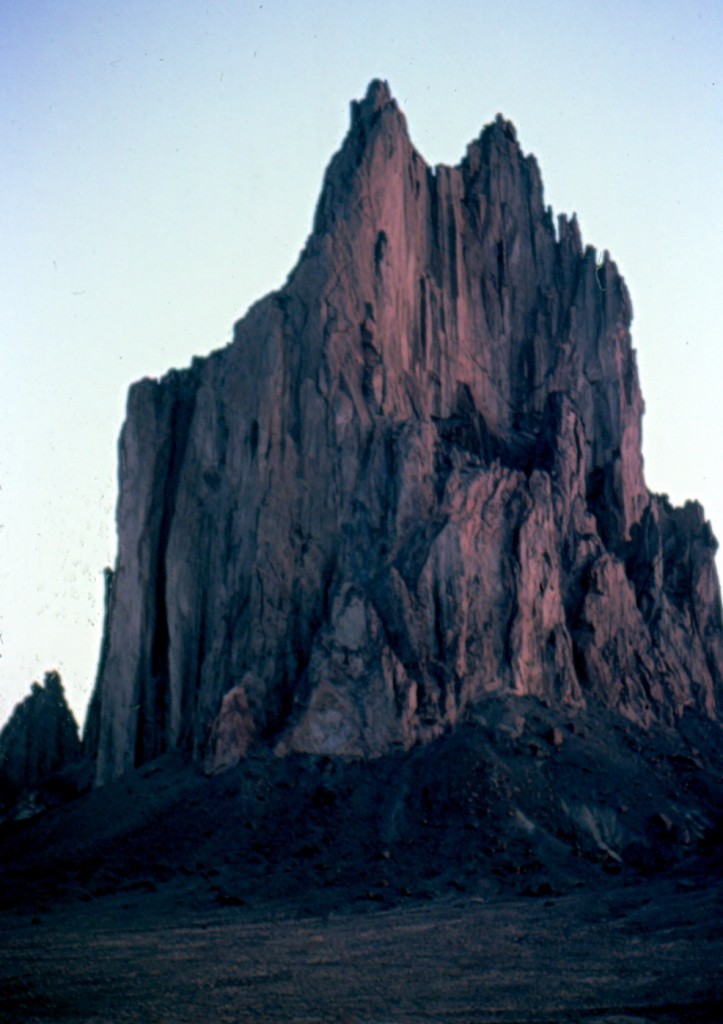 Two climbers and an old VW Bug were heading east on Route 66 on a cool but sunny autumn day in the high desert. The stereo blasted Led Zeppelin, and the beer flowed freely.

“Wow! There it is. That’s quite a chunk of rock! Look at that West Face!” George exclaimed! “It’s bigger than I remembered.”

The sun was setting over the desert horizon, and the alpen glow on the West Face was spectacular.  Neither of them could imagine that they would be watching it from quite a different perspective at the same time the next day.

George Bain was a rafting guide in the Grand Canyon who John met while working for one of the local homebuilders.  He had a passion for climbing desert spires and had done most of the Grand Canyon classics.

“Hey Mattson! Have you ever climbed Shiprock?” George asked one day during a lunch break.

“No, but I’ve seen it from the road, and it looks awesome,” John answered. “What’s the route like?”

“It’s mostly scrambling, with a couple of technical pitches. The hardest one is 5.9, but it is illegal,” George replied.

“How illegal is it? Do you think that we can climb it without getting caught?”

“My friends did it successfully a couple of months ago, so I know that it’s possible. One of them lives in Shiprock, so we can stay at his house and get all the information. He might want to do it again.”

“Sounds like a plan. When do you want to go?”

John rushed home after work to pack his car, and the eager duo headed east the next morning. They drove to the town of Shiprock, New Mexico, where they met George’s friend Jim and discussed the plans for the next day.

“There is a short 5.8 crux at the bottom, and then it eases up quite a bit until the last couple pitches. But the trick is to not get caught. Most groups have somebody drop them off so they don’t have to leave a car,” Jim told them.

“I have a better trick,” John said. “We park my old car at the bottom and leave one door open and an empty bottle of MD 20/20 on the floor. It hasn’t failed yet. I keep one in my car just in case I decide to climb something illegal in the desert.”

“Sounds good to me,” George replied with a chuckle, and Jim agreed.

The eager group was up at the crack of dawn, and  drove the old VW to a flat expanse next to the route and screeched to a halt. The area was already littered with broken glass, so they locked their valuable items in the trunk and left one door open with the wine bottle in obvious sight.

John scrambled up with the rope, and George and Jim followed quickly behind him. As they vanished into a huge amphitheater, the first crux — getting caught — was safely traversed.

From there, the route was mostly fourth-class scrambling, with a few, intermittent technical pitches. One of them involved climbing over the saddle of a main buttress and rappelling about sixty feet down the other side.

“If we want to go back this way, we need to leave a rope here,” Jim advised. “But I really think that there is an easier rappel route!” He had been here before, so they decided to trust him. 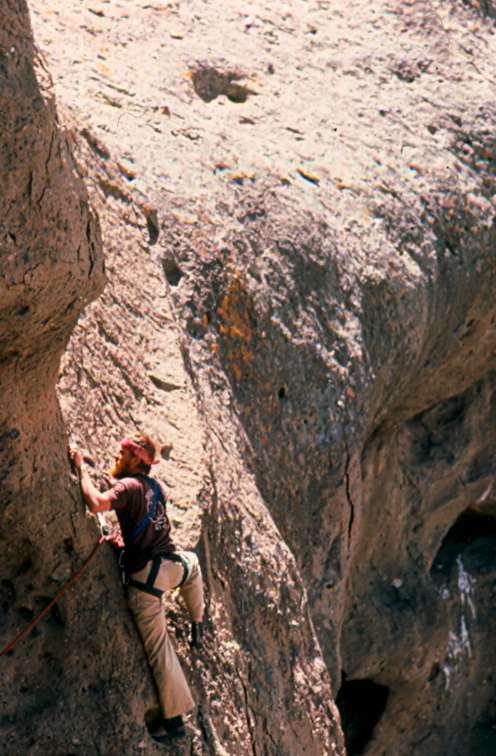 George Bain leading one of the crux pitches.

“No turning back now,” John said, as he pulled the rope. The trio scrambled up toward the summit, and the rock became steeper. The last pitch was truly classic, with a few 5.9 moves and huge exposure, as they finally joined the south ridge and peered down the blank west face. 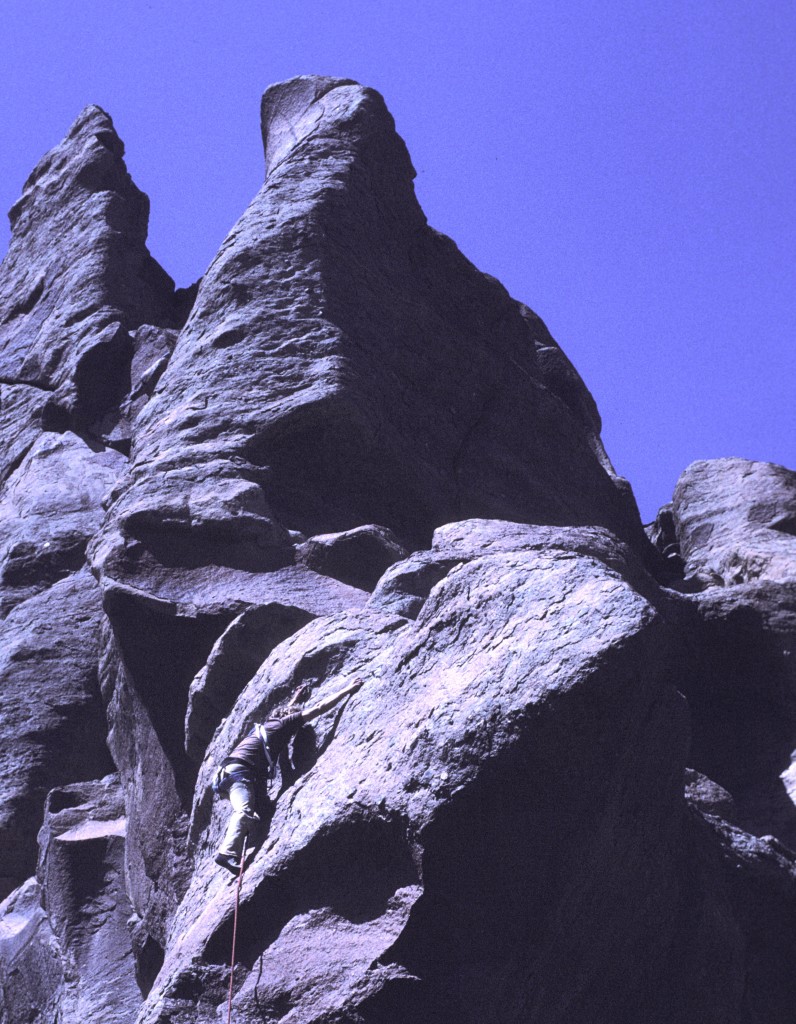 The summit was one of the best that John had ever seen. It offered a great view of the long dikes extending in many directions into the barren landscape and a summit register that belonged in a museum. The weather was perfect, so they relaxed for a bit before starting the downward journey.

“There’s the anchor that I saw last time,” Jim said, pointing to an old piece of webbing that was draped around a large boulder. It looked like a rappel route, but it went straight down the huge, nearly blank, west face.

“I don’t think that we have any other choices now. Sure glad I brought my bolt kit,” John said, as he carefully searched the summit for other options.

George backed up the sling with another new one, and John tied a knot in the end of the double ropes and started downward. He rappelled slowly and searched for another set of anchors, but there were none to be found. He was hanging in midair about 600 feet from the ground, with no ledge and no anchors in sight, so he decided to pendulum to the left. The swinging rope dislodged a large rock that nearly hit him, but he spotted a ledge, stopped swinging, and started to drill. It was a comfortable ledge, so he yelled, “Off rappel,” and his partners soon joined him.

“I have ten bolts. I hope that’s enough,” He said. “It looks like a long way to the ground.”

“I’m sorry. We should have gone the other way,” Jim apologized. He had never experienced a big wall and was looking kind of nervous.

“Too late now. We are committed,” Added George. “I’ll do the next one. You can’t have all the fun.”

“There must be a rap route around here someplace, but I sure can’t see it,” John added.

Jim was the next to go. He was starting to look stressed out, so John didn’t want to leave him alone.

George was drilling rapidly, with a big smile on his face, when Jim arrived. “Wha… wha… what should I do?” Jim asked tentatively.

“Just clip into that bolt with some webbing, and hang off your harness. Sorry no ledge” George replied. Then he yelled to John, ” Off rappel.”

John anxiously clipped in and headed down. “At least we don’t have to worry about the ropes getting stuck on ledges,” John said with a laugh as he reached the bottom of the rappel.

The sun was setting, and the view was stunning. The long volcanic dikes, which meandered somewhat aimlessly south and west to the horizon, reminded John of the Great Wall of China.

There was one more hanging belay and four or five rappels before the terrain eased. The darkness set in, but George had brought his headlamp, and one final, lower-angled rappel brought them back to terra firma. The VW had been left untouched, and they sped into town to celebrate.

Dancing on the Edge of an Endangered Planet