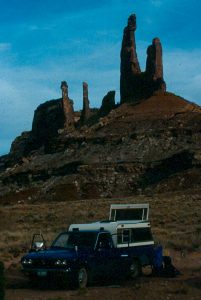 “Hey Mattson! Would you like to climb Moses? It’s a real classic spire in the desert, and it’s high on my list.”

“I’ve heard about it, but I’ve also heard that it’s really hard. Do you really think I can do it?”

“The route I want to do is a desert classic called the “Primrose Dihedral”, and it’s probably about the same as the Naked Edge in Eldo, and you’ve done that! The Wind Gate sandstone and remoteness might add a bit of a factor, but I think you’ll be fine, and I’ll lead the 5.11+ pitch. It has only been done a handful of times, and I think you’ll really enjoy it.”

Gordon Banks was the strongest climber I knew, and had been the “rope gun” on a few of my expeditions including the ultra classic Totem Pole in Monument Valley.

Technical climbing usually involves a team of two climbers who normally rotate going first. The lead climber or “rope gun” is carefully belayed by the “belay slave” but he or she takes a much greater risk because they will fall at least twice the distance from the last piece of protection ( if it holds). They are also faced with the added challenge of placing the protection into cracks in the rock, which requires a combination of keen engineering and common climbing sense which can take years to accomplish. It also requires a strong sense of confidence and a cool head, because nervousness will cause bad judgement and probably a fall. But, the leader gets rewarded by a greater sense of achievement and a stronger adrenaline or zen buzz. The “belay slave” enjoys the luxury of a tight top rope, but he or she often suffers a sore neck and a lower sense of achievement.

I have been climbing for quite a few years and I feel like I have a somewhat reasonable set of ethics. One of these insists that I lead at least a fair share of the pitches to really feel satisfied about a climb, but it’s great to have the partnership of a solid climber on a serious route.

“Ya sure! Why not?” I replied, and the expedition was quickly planned. We were both ready for spur of the moment expeditions, and within a few hours we were speeding west through the spectacular scenery of the rocky mountains and onto the great Utah desert.
This truly awesome paradise has been our refuge for many years, and our moods were in high spirits as we escaped the big city and entered the grandiose serenity of the high desert, with the added incentive of a challenging new adventure.
The desert wilderness suddenly appeared and the going got a bit rough as we left the main highway and dropped down a very steep and rocky road into the grand canyon of the mighty Green River.

“Wow! I hope we can get back out!” Exclaimed Gordon as my old Toyota pickup bounced over the defiant obstacles of the desert road.

Moses is one of the tallest spires on the Colorado plateau, and it’s grand south face is home to one of the hardest and most classic routes in North America. This famous spire is located in a remote side canyon of the Green River and only a few miles from the confluence of the Colorado in one of the most spectacular corners of Canyonlands National Park.

This was in the early 80’s and the spire was rarely climbed, so we enjoyed the solitude of an empty valley as we prepared for the next days adventure. The 600 foot tower looked a bit daunting as we entered the pristine valley and sleeping was difficult, so I spent most of the night staring at the brilliant stars in the dry desert sky, and dreaming about past climbing nightmares.

We were up at first light and greeted the dawn with all the energy we could muster.

“Good morning campers!” I exclaimed in my usual rhetoric, as I tried to rally my energy for the big adventure. The instant breakfast consisted of a warm cup of coffee and some dry granola bars that were greedily consumed before we packed our gear and headed off to the very steep and somewhat ominous start of the giant tower.

The first pitch was a really weird 5.11+ bombay chimney that looked extremely difficult, but Gordon flashed it and beckoned us onward. I had never achieved 5.11+ status so after a few feeble attempts, I used a technique that we used to call French free and quickly joined him at the belay. The next pitch was a friendly 5.10 crack in a dihedral corner, and I was happy to gain a bit of glory. The pro was great and the moves felt solid as I gradually surmounted another 100 feet of altitude on the gigantic tower.

The next pitch was one of the classic pitches that I’ve ever climbed! It was Gordon’s lead, and I clearly remember some very delicate stemming with run out protection that Gordon thought was quite hard (and that is really saying a lot). It was one of the most fun pitches that I’ve ever done. But, after recollecting and reading the current description, I think that we may have wandered farther to the right, and I remember leading a fairly serious pitch that involved a bit of French free. I also remember having a few stressful moments, but somehow we survived and eventually merged with the old 5.12 aid route near the summit. My recollection is that the last pitch was about 5.10 or French free and suddenly we stood alone on the top of a pristine spire in an empty canyon. It was a summit that few people had ever shared, and I could almost feel the spirits of the brave souls who had shared this remote spot. The view included looking down at the nearby spires and up at the rims of the great canyon. There was not another soul in sight, and we pondered this great space for quite a few moments before rapping down to the empty valley.

Reaching the ground after along day of constant adrenaline offered a grand feeling of finally relaxing, and the euphoria of accomplishing a great route. We celebrated by enjoying a delightful evening of savoring the afterglow of a great adventure in a pristine wilderness with the comfort of cheap wine, dried food, a grand sunset, and some very comfortable lawn chairs.