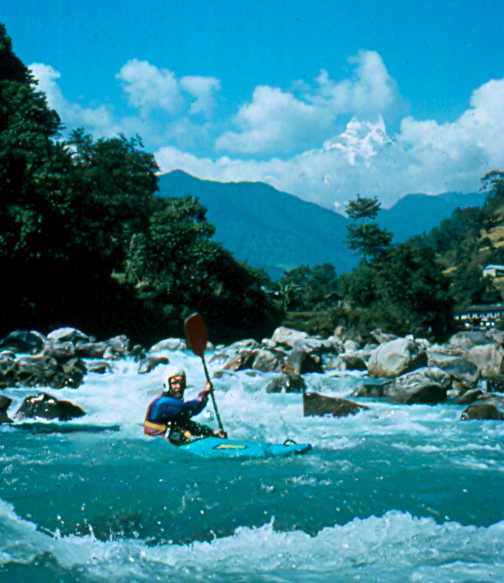 John Mattson paddling the Modi Kola with Machapuchre (The Fish Tail Mountain)
in the Background. This might be the best class IV that I have ever done.

My first day in Nepal was as euphoric as any that I have ever spent. The local residents  were chanting and performing their morning religious rituals, as the sun rose out of the mist and smog of the Kathmandu Valley. The thrill of being on the other side of the world combined seamlessly with the smell of incense, the towering Himalayas, and the joyous sounds of a completely different culture. I was with good friends, and a great adventure was just beginning.

We had been up at dawn and taken an early morning jaunt through the narrow streets to one of the great temples, and the incredible sights and sounds of the ancient city awakening overwhelmed all of my senses.

It felt somewhat like a dream as we recovered from forty-two hours of travel and remembered the events of the last two days — the many airports, the negotiations to get the kayaks on the planes, the midair party with the crazy businessman from Bombay, and sleeping in the sauna in the Singapore airport. (We were rudely awakened, and barely escaped caning.)

Then, three very tired boaters had arrived at the Kathmandu airport and were very happy to see the kayaks in the luggage terminal. We hadn’t seen them since LAX, and it was a great relief to know that they had arrived.

Kathmandu is a fascinating city, but the crowded streets and filthy conditions got old very quickly. So we loaded our kayaks on a taxi and headed out of the mayhem.

The traffic eased as we left the heart of the city and entered the lush rice fields of the Kathmandu Valley. Our first destination was the Balephi Khola, which is a small tributary of the Bhote Koshi, and the road we were traveling was an ancient trade route that followed the great river through the Himalayas to Tibet. (The greatest range of mountains in the world is not a continental divide like the Rockies, and many of Nepal’s rivers have their source in Tibet.) 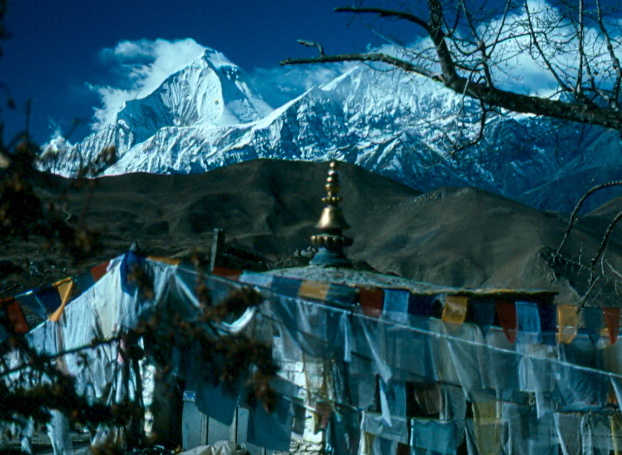 The famous temple of fire and water in Muktinath with Dhaulagiri in the background Annapurna circuit.

We were admiring the scenery and anticipating some great whitewater when the taxi suddenly stopped in a small roadside village.

“Road very bad. Taxi can’t go. Maybe a truck today!” our driver explained, as he started to unload the boats.