The W/J Rodeo in Aspen Colorado 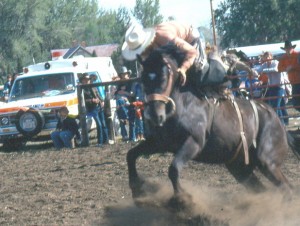 Unidentified cowboy about to get tossed, Glen Ullin N.D.

“Watch out for that horse! He’ll bite you,” exclaimed one of the professional riders, as I approached the horse I was about to ride.

Two weeks earlier, I had seen a poster advertising a big rodeo that was coming to town.  It was my first summer in Aspen, and I was young and fearless and looking for ways to vent my energy.  Riding horses had been one of my favorite activities while growing up on the farm, but I had never ridden a wild one.  My farm horse was so tame that I could walk up to him in the pasture, jump on, and ride without any hardware.

My father had taken me to a rodeo when I was quite young, and I still remembered the excitement and the brave men who called themselves cowboys.  Trying to ride a wild horse sounded like a fun challenge, so I decided to give it a go.

The next day, I called the promoter.  The entry fee was thirty-five dollars, and I would be able to borrow the necessary equipment from another cowboy. The promoter gladly accepted my money and wished me luck.

When I arrived at the rodeo, it was already a very busy place.  Dozens of brightly clad cowboys were herding the wild horses and bulls into their designated chutes, and the adrenalin level of the competitors was very evident.

One of the bulls had very long horns, and when one of them got caught on the 2×6-fence railing, he ripped the plank right out of the post!  I was very happy that I had not chosen to ride a bull!

A friendly cowboy let me borrow his rigging, and I cinched it around the rib cage of the wild horse while he kicked and tried to bite me.  I had a few minutes to wait until my ride, so I found a comfortable place on the fence and watched as the wild horses literally exploded out of the small chute. The tension mounted as I watched many of the cowboys get thrown onto the arena floor.

Many people think that the sport of rodeo is very abusive to animals, and they may be right.  But I think that it depends on the promoters and stockowners, and sometimes it seems like the horses are having as much fun as the cowboys.  And they only work about eight seconds a week — better hours than a major league pitcher.

In my eagerness to compete, I had managed to neglect one small detail.  The W/J rodeo was a nationally sanctioned professional event, with professional riders and professional horses.  Some of the horses were as famous as the riders, and I had drawn a good one.

But, you pay your money and you take your chances. So, when it was my turn to ride, I carefully climbed onto the back of the large black animal.

Imagine the strength of a 1,200-pound wild horse!   He was confined in a box where he could barely move, but his muscles throbbed like a volcano about to erupt. 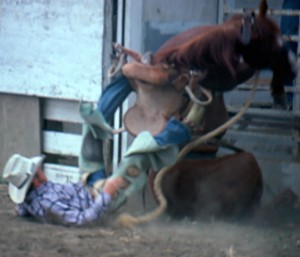 “The next competitor is a local boy named John Mattson,” the announcer told the crowd.  “It’s his first rodeo, and he is trying his luck on a horse called Black Lightening.  This horse has quite a reputation on the circuit, and has sent a lot of professional cowboys into the dirt. He is famous for taking big jumps right out of the chute, and his high twisting bucks are hard to handle. This kids gonna need a lot of luck, but he looks ready for the challenge, so lets give him a big hand and see what he can do!”

As I sat on top of the trembling beast, I knew that he was right. I took a few deep breaths and nodded my head to the gate man.  And then the volcano erupted.

“Wow! Look at that jump!” the announcer exclaimed, as the large beast suddenly gained his freedom. “Black Lightening is living up to his reputation, and that young cowboy is hanging on for dear life.  I can’t believe that he’s still on top, but he’s hanging in there.”

“The clock is up to 4 seconds, and now five, as Black Lightening throws a hard twisting buck that throws the young cowboy off balance. The horse seems to sense the victory, and sends him flying with another hard buck. That’s quite a ride for a rookie, but not quite enough for Black Lightening.” 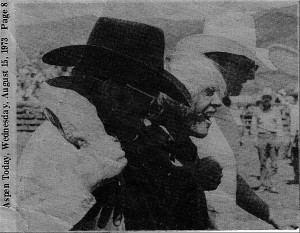 John getting helped off the arena after his first wild ride.

“Folks! Let’s give this cowboy a big round of applause, cuz that’s all he’s gonna get today, and I think he’s gonna be a little sore tomorrow.”

I must have overdosed on adrenalin, because my memory of the ride was just a blur. I do know that I stayed on long enough to make it to the far side of the arena. Since then, I have heard similar stories from other rodeo competitors, and one cowboy told me that he had a memory blackout for his first three rides.

The ground was soft, and the horse was content to have me off his back, so he did not step on me or try to gore me, as a bull would have done.  Even wild horses are basically gentle animals, and they rarely intentionally injure a rider.

To dance on the edge is a wonderful thrill, but falling off can be terrifying and extremely dangerous.  I had stumbled during my first dance, but I had enjoyed the adventure and vowed to come back and try again.  Next time, though, I would be a bit more cautious. I had injured my shoulder in the fall, but it healed quickly, and I only missed one week of work.  Some of the members of my carpenter crew were local cowboys, so they were very sympathetic.

The next spring, when I was back in North Dakota helping my Dad plant the crops, I saw another rodeo ad.  This was a small local one with a lot mellower animals, and I managed to win back half of my entry fee and made friends with some of the local cowboys.

They had a great zest for life, and were fun to hang out with.   Ken Voight’s family had a ranch with an indoor arena and a mechanical bull, where  Ken and his friends could practice.

One of his friends was a bull rider and was dating one of the beautiful barrel racers. The cowgirls were a very important part of the rodeo scene.

Ken coached me, and we spent a few hours practicing on the mechanical bucking device.  Practice makes perfect in any sport, and I managed to ride a few wild horses. But the entry fees were expensive and I wasn’t winning as much as I spent, so I drifted back to rock-climbing.  I could get the same adrenaline buzz for a lot less money, and it was really fun too and probably a lot safer.

Whenever Ken introduced me to his friends, he would say that I was trying to be a cowboy.

I guess I never succeeded, but I had a good time trying, and it sure was fun hanging out with the cowboys and cowgirls.