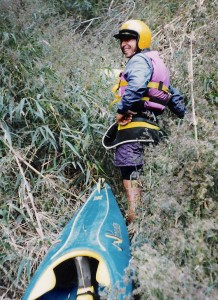 John portaging through some intense bamboo on a first descent.

“Plunge boldly into the thick of life, and seize it where you will, it is always interesting.”

This story is dedicated to the memory of John Foss, who was a great friend and an incredible force in the kayaking world for many years.

I met John in Flagstaff, Arizona, in the late 1970s, when he lived in a slum dwelling on south Fountaine Street with a group of firefighters & climbers. The floor was constructed of two-by-fours, and it bounced like a trampoline during the many reggae parties that John and his friends had hosted.

Kurt Casey on the first descent of the Gol Go

John had started paddling in Arizona with my friend Little Buddy (One of the AZ Banditos who climbed numerous illegal spires in the desert.) but he soon became bored with the lack of whitewater in that desert state and wandered first north, to Colorado, Alaska, and Idaho, then south, to Chile and Peru, in his constant pursuit of adventure. He used my house in Boulder as a parking lot on numerous occasions, and I once gave him a ride to DIA with seven kayaks, all filled to the brim with Skil saws, camp stoves, and other miscellaneous items that he had planned to use for his new life in South America. 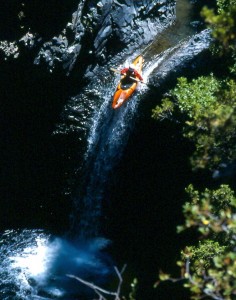 Ethan Greene running the entrance drop into the canyon of 22 waterfalls, on the Rio Clairo

John had an exuberance that few people shared, and I clearly remember his smiling face, which would materialize whenever the adrenaline was sufficient or the party atmosphere reached a certain critical mass. If the atmosphere wasn’t up to his standards, he would quickly find a way to raise the excitement level, so traveling with him was a guaranteed adventure. 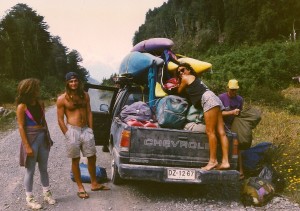 I spent nearly two months traveling with John, Kurt Casey, Dave Black, and a beautiful Chilean woman named Eva Luna in the Chilean summer of 1994. The trip was filled with epics, and the title of this story became our motto.

My last conversation with John was about kayaking in Asia. He wanted to do a long Class V river that had never been run and was inquiring about logistics and costs. He died a few weeks later — on a first descent of the Río Huallabamba in northern Peru — and many women were left crying. He is deeply missed by his many friends, but his spirit will always be with us.

The Legend of the Naked Devil

John had a very strong love of nature, and he enjoyed running around in his natural attire whenever the climate allowed. He was a big man  with very muscular arms and his skin was a bit red from the equatorial sun. His hairline was also receding, and that may have helped with the confusion. John was wearing nothing but a camera on one of his many first descents in the Peruvian jungle, when he encountered a local native woman. She stared at him for a brief moment and then screamed hysterically, as she ran away. The group stopped at a village a few days later, and the word had spread rapidly downstream.  Everyone wanted to know if they had seen the naked devil.

A guide to the rivers of Chile: