“When fun is outlawed, only outlaws will have fun”       John Jaycox 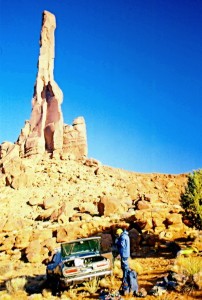 Economic conditions in Flagstaff had forced Sven to move north, but the great image of that classic, slender, spire would not go away.

Little Buddy told him that the Banditos had put up a new route on the South Face. They said that it was quite hard, and though Sven knew that they were very good climbers, he and his new friend Mark decided to try the new route. They had been climbing together all summer on Independence Pass and felt fairly confident. But, just to be sure, they decided to do a warm-up climb on a tower called Earth Angel near Sedona. It was a long, classic route and would be good practice for the main objective. It was also a little warmer weather, and they didn’t have to worry about getting busted and possibly thrown in jail.

The pair had a great day on Earth Angel and felt that they were ready for their final goal. So they drove into Monument Valley in the dead of night and camped behind the great tower.  A small moon provided just enough light to walk, and they went for a short hike to the base of the tower. It was big and steep, and the first pitch looked really hard.

Sven went to sleep listening to the wind and the magical, near-silent desert. They awoke early to a crisp autumn day and quickly prepared for the climb. Sven remembers a weird, overhanging, dihedral chimney that was very awkward. There was an old number one friend stuck in the crack about halfway up, and he managed to stem his way up to that point. After a short rest, he kept on stemming, but the route seemed to be getting harder, and it was going to be quite a run-out to the next protection.

“Watch me! This is really hard, and the pro sucks,” Sven warned. “I could aid it if I had some pitons, but I’m quite sure that the Banditos did this pitch free. It looks like it eases up in about ten feet, but watch me close. This is really thin.”

Sven’s right foot started to slip as a small hold fractured, and he lunged for a large handhold that was nearly in reach. But the effort was a little bit short, and he came tumbling down about twenty feet.

Sven tried to move upward again, but his arms were getting pumped, and the fear was starting to overwhelm him. As his strength waned, the route seemed to be getting harder, and he began to realize that he would not achieve his goal that day. So he very sadly lowered himself off of the fixed friend.

“I really don’t feel very good about this climb!” Mark said, when Sven offered him the lead. “I’m sorry, but I’d really like to get out of here.”

Down that lonesome highway through Mexican Hat and Moab, they drove in near silence. As he gazed at the beautiful scenery of the Colorado Plateau, Sven was deep in thought about how he would achieve his goal. He realized that he would have to train even harder, or else find a rope gun to lead the first pitch.

Who could he ask to share this great quest? The Banditos had already done the first ascent, and they were not anxious to repeat it. And his old partner, Gringo Negro, had just gotten married and quit climbing again. What about Gordito Bankos? The soft-spoken friend of Danger Dave was a very accomplished climber, so Sven decided to give him a ring.

“Hola Gordito! It’s Sven. Hey, I just got back from the Totem Pole… we didn’t make it. The first pitch is really hard, but I want to try again. Do you want to go?”

“Yeah, but it’s really cool, and I think we can pull it off. My buddies have been climbing there for a couple of years without problems. But don’t tell anybody — I promised I’d keep it secret.”

“How hard is it?” Gordito asked.

“The first pitch is solid 5.11, and maybe harder. The Banditos did the first ascent, but I heard that it took a lot of tries, and they are very good climbers,” Sven answered.

“When do you want to go?” was Gordito’s next question.

“How about next weekend?” was Sven’s reply. 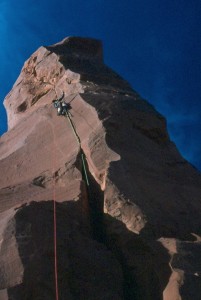 They packed the old Datsun quickly, and once again, Sven was heading down that lonesome highway through the Colorado Plateau. The journey took them through the great canyons of Utah and the flatter desert near the Arizona border, where the great towers of Monument Valley rise up above the sandy desert floor.

Mexican Hat was the last town before the reservation, so they stopped to have dinner and discuss the last-minute logistics.

“So, Gordito, are you ready to become a criminal?” Sven asked jokingly, as they dined on a fine dinner of Navajo Tacos.

“I guess so, as long as you think that we won’t get caught,” he replied.

“I’ve been there three times now, and no problems yet, but we have to be careful.”

“What do you think they will do if they catch us?”

“I don’t know. Probably throw us in jail and take our climbing gear,” Sven joked. “But don’t worry, we’re not going to get caught.”

They paid their bill and headed south into the high desert valley. The main road into the park was blocked, but there was a rough dirt road around the barricade, so they ignored the “No Trespassing” signs, bounced through the seasonal creek, and made their way back onto the main road. The moon was bright, and they could see the Three Sisters from the road.

“Isn’t this awesome?” Remarked Sven. “We are almost there. Just one more barricade and a couple hundred yards of bad road. There it is! This is as far you can drive legally during daylight. The camping spot is on the south side.” Sven drove carefully around the last barrier.

“Whoa! The road is a lot worse than it was last weekend.” Sven said. “They must have had some rain, and this Datsun isn’t really designed for four-wheeling. I sure hope that we can get back out. This is the camp, and there is the route.”

“Wow! This is really amazing, Sven. I’m glad to be here,” Gordito exclaimed, as he stepped out into the moonlight.

The night air was crisp, and there was a slight breeze blowing between the Totem Pole and Yei Bi Chei Dancer formations. The moon provided a magnificent ambience, and the wind made an eerie sound, as if it were awakening the spirits of these ancient towers. The coyotes were howling, and a few dogs yapped in the nearby hogans. The two climbers slept outside and watched the brilliant sky, as they dreamt about other epics, wild summits, and Navajo prisons.

After a quick breakfast, Gordito grabbed the lead and cruised quickly up the dihedral where Sven had faltered. Sven managed to follow with a tight rope, and greeted Gordito at the top. “Nice lead,” Sven said. “You made that look pretty easy.”

“You were right, it was kind of hard,” he replied modestly.

The next pitch involved a bit of stemming and another classic jam crack, which was very similar to the one on the North Sister, so Sven grabbed his étriers and friends and worked his way up the crack. Gordito followed by climbing the crack free and said that it was probably solid 5.10+. The last pitch was very steep and included a few sections of nearly blank wall. The Banditos had drilled shallow bat hook holes as high as they could reach for direct aid, then added a real bolt whenever their nerves needed to be calmed.

Gordito was anxious to lead, and Sven did not try to stop him. He cruised quickly to the top, and once again, Sven got to practice his grunt-and-dangle technique with the jumars. Part of the route was overhanging, and Sven remembers spinning in circles and swinging in the wind as he worked his way to the top. 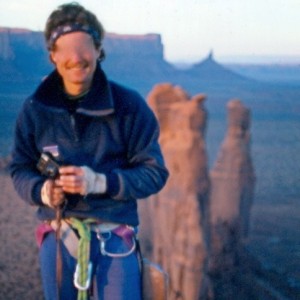 The summit was an incredibly small tabletop plateau with an excellent view of Yei Bi Chei and the great valley below. There was a small canister for a register that contained the names of the two other parties who had climbed the new route. Clint Eastwood and friends had reportedly taken down the old register after their final ascent of the original route.

Gordito and Sven were enjoying the summit immensely when two locals drove by in a pickup truck.  They tried to duck, but it was obvious that they had been spotted.

“How’s the weather up there?” one of the friendly locals asked.

“Great! How is it down there?” Sven answered.

These locals didn’t seem to care, but Sven was afraid that someone else might, so they quickly rapped down and drove back to Mexican Hat to celebrate their success.

Sven was very happy to make this summit and eager to honor his promise of secrecy to the Banditos, so he spread a rumor in Colorado that they had gotten busted and he never climbed there again.

Current Conditions: The conditions have changed since the early 1980s, when this took place. Sven stopped at the scene of the crime a few years ago and noticed that there were “Climbing is Strictly Prohibited” signs in many prominent locations. The current Navajo Tribal Council seems to be very serious about enforcing this rule. Sven has repented for his past sins, but he really is not sorry that he stood on the summit.

Link to a great book about the history of climbing in the desert.