“All good things are wild and free”  Henry David Thoreau 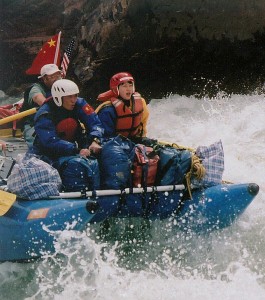 Xiao Mu (The Katie Couric of China) riding some big waves on the first descent, with Pete Winn rowing,

The sky was dark with the threat of an afternoon storm, and a strong wind  intensified the eerie mood as we paddled under the last modern bridge. A throng of colorful locals — some of whom had been waiting three days for us to arrive — cheered us on from above. Our team consisted of twelve men and one woman who ranged in age from 20 to 58, spoke three different languages, and represented four different countries — China, Japan, Australia, and the United States. Most of us had not met before this trip, but we’d come together to attempt a first descent of one of the last great canyons in the world. 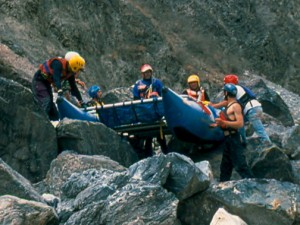 Intense portage through an active rockslide!

The Chinese government had thrown us a huge send-off party, and a diverse and curious crowd of Tibetans, including many of the legendary Khampa Warriors on motorcycles, had been watching and following us along the road for the last four days. We had just paddled through a beautiful canyon, with some big wave trains and intermittent Class III to IV rapids, and it had been great for evaluation and team building. But practice time was over — the road would soon be gone, and the rapids were getting more difficult as the river became bigger and steeper! 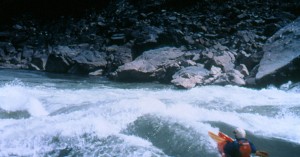 First Decent of “Twisted Sister” rapid near the Yunnan border