“And forget not that the earth delights to feel your bare feet and the wind longs to play with your hair.”   — Kahlil Gibran 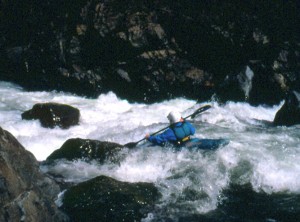 Paul Z in action on one of the Sierra classics>

The late Paul Zirkelbach (also known as Pablo) was talking very excitedly on his cell phone as we cruised along Route 50 in the spectacular Sierra Nevada Mountains of California. “Lars just told me about a new run that isn’t in any guidebooks yet. It sounds really good, so I think we should do it.”

“It sounds hard, but he said it was really good,” he replied. “The takeout is the same as Devils Canyon, and that is one of my favorite runs.”

“Sure, sounds good, why not? Let’s see if the rest of the group wants to join us,” I said.

We had been paddling for a couple of weeks in the Sierras and were feeling quite confident. 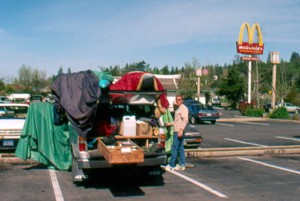 “I think I’m going to skip this one,” John Moran said, “but I’ll drive the shuttle for you.”

Joyce, Rolf, and Dave were eager to go, so we loaded all the gear into John’s van and headed off on another dirt road in the High Sierras.

“The water level looks perfect!” Pablo said, as we gazed at the 300-400 CFS flow in the gentle mountain stream.

We quickly organized our gear and entered the creek at about ten in the morning.

“Wow Pablo! This is really cool!” I exclaimed, as we paddled some incredible Class IV+ to V- whitewater in a pristine wilderness setting. “Did Lars say how long it was?”

“Oops! I forgot to ask him, but I’m sure it’s a day run,” he replied with a chuckle. “Let’s take a lunch break.” We spotted a beautiful flat rock and stopped for a relaxed lunch and a short siesta in the warm sun.

“I think it’s going to get steeper,” Dave said, a bit stressed.

Soon after we donned our gear and headed downstream, we discovered his prediction was 100 percent correct. About half a mile farther, a large tributary entering from river right doubled the volume, and the gradient increased drastically. The mellow little creek had suddenly turned into a raging torrent of about 800 CFS with about a 300- to 400-foot-per-mile gradient.

“I was afraid that was going to happen,” Dave said, as we stared in awe at the raging river.

“Maybe we should hike out,” I suggested.

“I wouldn’t recommend it,” Pablo replied. “It looks really steep, and the poison oak is intense here. Plus, you’ll be in the middle of nowhere when you get out. “I think that we are stuck with the river. This rock looks a lot like the last part of Devils Canyon, so I think that we’re almost done.”

We carefully scouted and portaged where we could, but in many places the rock walls were sheer and portaging was not an option. We were in the middle of a long portage when a sheer cliff blocked our path. It was possible to continue the portage on river right, but the ferry was a solid Class V, and if someone missed the ferry, they would be headed downstream into a maelstrom of huge holes and small eddies that seemed to go on forever.

“I see a line!” Paul said, as he dragged his boat on top of a fairly flat rock. “If you get a good seal launch here, you can catch that eddy over there, and after that it is a lot easier. I’ll go first and help grab boats in case anybody needs help.”

“Stroke hard! That current is stronger than it looks.”

One by one, we followed his lead, and soon we all reached the right shore, where the portage continued. A few minutes later, we reached another big drop that looked very hard to portage.

“There’s a sneak route on the right!” Pablo said, pointing to a boulder-choked chute.

There was a pretty contrived route that threaded between some large boulders, so we set up safety and watched him go. He almost made it, but his boat pinned sideways between two of the boulders, and he was forced to bail.

“I was kind of afraid that might happen,” he chuckled, as we pulled his boat out of the water and found a portage route. Another attempted sneak had very similar results, and we wasted some more valuable daylight.

“We must be getting close to the bridge by now,” Pablo said hopefully, as the gradient eased slightly.

He took off in the lead to do some fearless eddy scouting, boofed a big drop next to a large boulder, and disappeared downstream. I tried to follow his line, but the eddy was really small, and though I struggled furiously to catch it, I found myself headed backwards into another maelstrom that had not been scouted. I quickly turned my boat around and splashed through a huge hole, struggling to remain upright and find another eddy.

The powerful whitewater was blinding, so I shook the water out of my eyes and paddled furiously. There was another huge ledge drop right below me, and I had a very sickening feeling as my boat dropped over the edge. I took a deep breath and stroked as hard as I could, but the effort was useless. A big back-endo sent me back into the middle of the hydraulic, where I struggled futilely to remain upright and breathe.

I was getting the thrashing of my life, and there seemed to be no chance of being released. So I pulled the ripcord, dove for the bottom, and hoped for the best. When I hit the current, the sudden acceleration flushed me over a few rocks, and I bopped up to the surface close to a small eddy. A very desperate burst of energy gave me the strength to pull myself out of the raging torrent and onto a rock, where I lay helplessly, trying to catch my breath. I had managed to hang on to my paddle, but my boat had vanished downstream. The rest of the group had decided to portage and inquired about my condition as they walked past on the other side of the river.

“Your boat is really well trained,” remarked Dave. “It eddied out just downstream and is waiting for you. The next stretch is fairly calm, so I’ll ferry it across.”

My energy was returning, so I scrambled downstream and happily retrieved my boat. The daylight was almost gone, but we found a very large eddy and a pleasant beach that was filled with driftwood. Three abandoned kayaks were stacked against a large log, and we could only imagine what had happened to their owners as we struggled to build a fire and prepare for a cold night.

“Those guys must have decided to hike out,” Joyce said, as we huddled around the fire in our wet gear.

“You’re probably right,” Pablo agreed, “but I still don’t recommend it. I’ve done enough bushwhacking around here, and it really sucks. I’m sticking with the river. It’s got to be almost done.”

“You’ve been saying that all afternoon,” Dave chided.

“I know, I know, but all rivers eventually end. At the rate this creek is dropping, we’ll be at sea level pretty soon,” Pablo joked.

It was a cold night, and our spray skirts and life jackets didn’t make very good sleeping bags. But the fire was warm, and at least we had a meager dinner of PowerBars and chocolate.

“Good morning, campers!” I exclaimed the next morning, trying to psyche myself up for another day. “I sure hope this river ends soon. I’m tired, and my adrenal gland has OD’d.”

“Me too. My ear is getting worse,” added Dave, who was suffering from a very bad case of swimmers ear. “I can barely hear, and my balance feels really weird.”

We shared two apples and our remaining PowerBars for breakfast, and then prepared to paddle onward in the crisp early morning air. After half a mile of reasonable Class IV eddy scouting, our progress stopped abruptly at a raging thirty-five-foot waterfall.

“It looks like there is a small ledge down there, so maybe we can lower the boats,” Pablo suggested, as we stared at the raging falls.

“I’ll go check it out,” I replied, then anchored a throw rope and climbed carefully down the slippery rocks. “That ledge is small and really slippery. I don’t think it’s going to work. I’m coming back up.”

“Maybe we can throw the boats in and swim after them. I’ve done that a couple of times and had reasonable luck,” Pablo said.

“I think I see a route through this poison oak!” Joyce said, hoping desperately that the group wouldn’t follow Pablo’s lead.

She and Rolf had just experienced their first bivouac, and she was as anxious as anyone to get out alive. The route she found involved a fairly challenging scramble through a dense thicket of poison oak, but it looked better than the other options, so we danced our way through the nasty bushes and took a bath in the river after the portage. The gradient eased a bit, and we were able to paddle most of the remaining drops. But we scouted often, and climbing in and out of our boats on the slippery rocks was exhausting.

“Wow! This canyon just keeps on going, doesn’t it?” Dave said wearily, as we stopped again to scout a big, blind drop.

“Hey! Look over there!” Joyce exclaimed.

The metal framework of a large suspension bridge was showing through the bushes, and the jubilant group paddled onto the Middle Feather, right to the sandy beach that marked the takeout.

A few days later, at a big party in Nevada City, we found out the story behind the three abandoned boats. Their owners had decided to hike out and had spent a miserable night in a steep patch of poison oak without a fire.