How Kayaking Ruined my Climbing Career Glenn Rink rapping off of Snoopies Nose after the first ascent. He forced me to put my name on the waiting list after this trip. 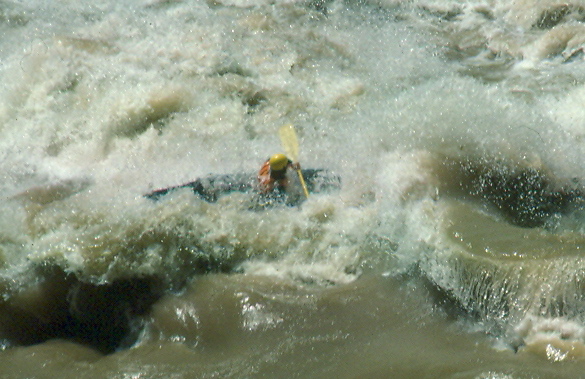 Mr. Mattson: You are currently number 814 on the waiting list for a private permit to float the Grand Canyon. You may apply as early as next year, but if you wait one year your chances of getting a preferred date will be much better.

“Wow! Maybe I should start kayaking.”  My mind was buzzing with new ideas, as I walked away from the Aspen post office.  I spotted a garage sale a few weeks later, and traded an old pair of skis for an old kayak, and the needed accessories.  I had a small Sears Raft, and managed to talk some friends into a maiden voyage down a class II section of the Roaring Fork river. Captain Gundy performs a wedding ceremony on his homemade raft at Vacey’s Paradise.

The new craft was an instant hit. The boat was quite stable and could be maneuvered very easily. I was cruising upright around the rocks instead of bouncing upside down over them, and the cold water splashing on my face was very refreshing.

We stopped for lunch on an empty beach with a fabulous view of Mount Sopris, and I felt like I had entered a hidden paradise in my own backyard.

The rest of the story: https://danceonedge.com/?page_id=734